October was a busy month mainly completing High Friction projects in Birmingham and Telford. Find out more in our October Roundup 2021

October shaped up to be a month of highways maintenance and safety works, which was a change from our usually very decorative-heavy outdoor resin flooring programme. Involving some rather chilly nights, working in Birmingham city centre and an MMA project for Balfour Beatty in Telford. We also managed to fit in an EPDM wet pour Safety Surface for a local school playground. Read more on our October roundup 2021 below

McPhillips’ scheme for improvements to the public realm and public transport connectivity in the Snow Hill area of Birmingham City Centre got underway in June and is proceeding well.

The first phase is focusing on improving Colmore Row and Livery Street and is part of a wider package of work being delivered by Birmingham City Council and funded by the Greater Birmingham and Solihull Local Enterprise Partnership and the Colmore BID.

Cllr Ian Ward, Leader of Birmingham City Council, said of the project: “Our city centre welcomes more than 42 million people a year, and following the regeneration works around Centenary Square and Paradise, it’s time for us to revitalise the business and retail areas.”

HMS received the order to complete over 1,300m of buff and grey cold applied high friction surfacing to the carriageway from the train station down to the tram line, and the crossing point outside Snow Hill station.

Works were completed over 4no night shifts commencing at 9pm and working through the night. To make best use of the time, we also managed to squeeze in 10no resin tree pits whilst waiting for the high friction surfacing to cure before sweeping, and handing the road back over by 6am!

HMS has been supporting Balfour Beatty on their term maintenance contract with Telford and Wrekin Council for over a year, with the latest requirement being two areas of MMA based high friction surfacing, to replace old and failed thermoplastic pattern imprinted paving at Tontine Hill in Ironbridge.

MMA or Methyl Methacrylate binder is potentially the best quality product that can be used for highways works of this nature. Super hard wearing, aesthetically appealing, and with an all-important curing time of approx. 30 minutes it’s the gold star of high friction surface dressing.

Two areas were completed, using a corresponding grey Guyanan bauxite aggregate to increase skid resistance and surface PSV to 70+, meaning the use of the road is now safer for everyone.

A local school’s existing playground was in need of repair. We were more than happy to transform the playground to make it safe and fun for the children. We removed the existing failed EPDM surfacing and prepared the surface to lay 50mm Decra®Play EPDM wet pour safety surfacing. Comprising of 35mm compacted 3-6mm black SBR chippings and 15mm EPDM 1-3mm coloured surfacing chippings bound with polyurethane binder to level. 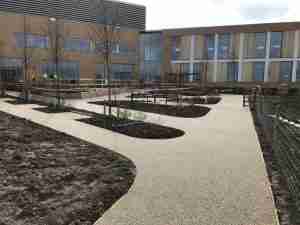 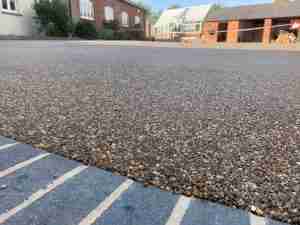 Get the latest news and updates delivered right to your inbox!

After signing up for the newsletter, you will also receive occasional surveys and special offers from HMS via email. We will not sell or distribute your email address to any third party at any time. View our privacy policy.